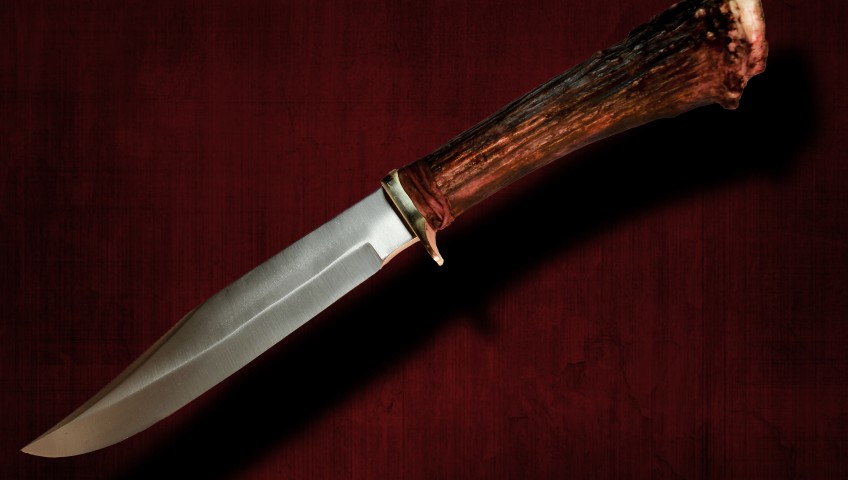 You have noticed that everything that an Indian does is in a circle, and that is because the Power of the World always works in circles, and everything tries to be round....The Sky is round, and I have heard that the earth is round like a ball, and so are all the stars. The wind, in its greatest power, whirls. Birds make their nest in circles, for theirs is the same religion as ours....Even the seasons form a great circle in their changing, and always come back again to where they were. The life of a man is a circle from childhood to childhood, and so it is in everything where power moves.
"All things in the world are (naki-two). In our mind we are two -- good and evil. With our eyes we see two things....things that are fair and things that are ugly....we have the right hand that strikes and makes for evil, and the left hand full of kindness, near the heart. One foot may lead us to an evil way, the other foot may lead us to a good. So are all things two, all  Naki."

Robert Naki-Bésh Redfeather, being ( Mashgalé Ndee ) Mescalero Apache  in 1980 sought out his relatives on the Mescalero and other Indian reservations in South Eastern New Mexico and Arizona.  Redfeather was trained by his Grandfather in survival, and Nagondzoog (old term) Means War/Fight/Guerrilla Warfare,  Nagonłkaadí Means War/Fight/Combat -- the unique Apache brand of guerrilla warfare. Both of these were made famous by the Apache realm of powerful War Chiefs such as Mangas Coloradas, Cochise, Victorio, and Geronimo, who was a Bedonkohe Apache Leader.  In addition to his native culture, Robert Redfeather has been training in the martial arts for 48 years and is an 8th degree Black Belt. He has also been honored and inducted into several Hall of Fames across the country. Now with all this knowledge and life experiences, Redfeather is honored to pass it on through "Apache Knife Training Courses". He is also happy to pass along the history and traditions of his family and heritage, the Apache people. Redfeather, who teaches not from theory but from his life experience, is known for his training of our U.S.Military Troops, Police Officers, Native Americans, and anyone who has a desire to learn. A five-part certification course is available to enable you to teach "Apache Knife Training".

For more info click here! Then go out and train!! 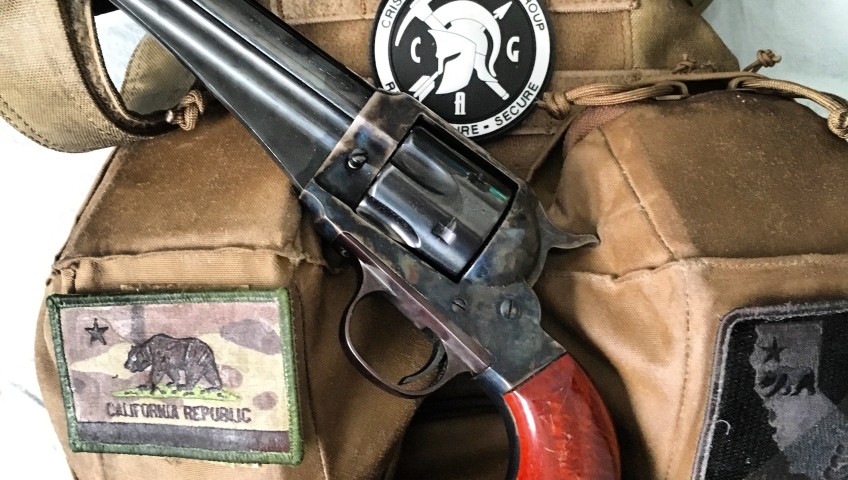 Available to freaks seeking techniques and pencil neck geeks! This group fosters civilians who are looking to be prepared in any situation. Very cool group of individuals who are active duty special forces, civilians, and veterans alike. This group is full of people who are looking to advance their well being, family, and others around them.

The Crisis Application Group, or C.A.G. is a private group that consists of professionals and law abiding citizens committed to self defense and self reliance. Our mission is to foster a mature network of proactive, training oriented adults and sponsor dialog across our national and international network.

Our members earn tabs for their hard work and training plus take advantage of special incentives, programs and discounts. We are supported by a growing list of affiliate small businesses in both training and retail that cater to our unique members.

There are no prerequisites to join, other than a mature attitude towards training, work and learning.

*Once you have purchased your membership: 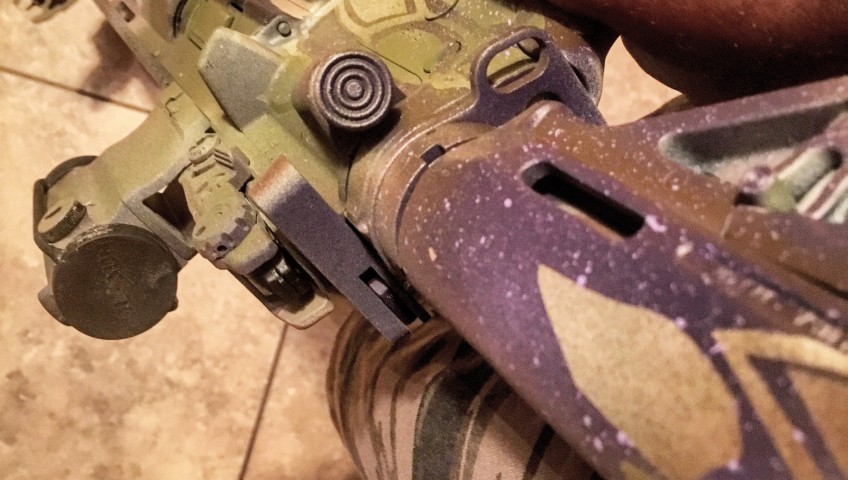 At one point in my life I was content with being an Old West weapons specialist. Read books upon books, collected 8+ guns in a matter of 2 years at one point. Every month I was buying a new firearm and shooting it! Not so much a guru of single action or medicine man / shaman when it came combat medicine but I know my history. More importantly Buffalo Soldier history. I hit a standstill so I wanted to take it a bit further. Guys in my unit stated to me that in a fight with anyone (modern day) they're going to have automatics and new aged weapons. I thought well I'll be damned if anyone is going to act like they can kill me, I shoot my single action like an automatic homie! Only thing was I couldn't reload as fast. Visual acuity and accuracy were fine as I normally don't rely on speed.

You are building an ArmaLITE Rifle. Not an Assault Rifle, Automatic Rifle. "AR" stands for ArmaLITE Rifle. So in your mission to complete and build this ArmaLITE Rifle learn everything about it! Simply put; watch all the youtube videos you can watch! The objective is to thoroughly enjoy the hunt! When learning didactically most people are visual so videos can help drastically. Read magazines. Join forums. Become engulfed with you are about to know everything about an semi-automatic rifle! Or automatic if you're outside California.

I started off with a simple sketch after looking at a million different rifles. Basically my blueprint. My dream rifle I could make for under $750 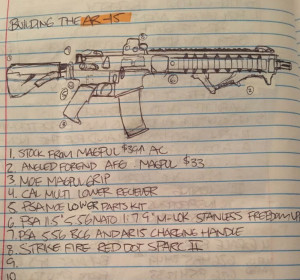 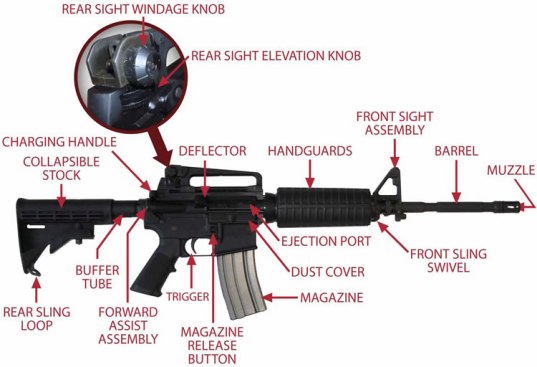 The only thing you need to actually have a background check for is your lower receiver.

These will cost you roughly $108 for the receiver itself. $50 for the Transfer. $25 for the DROS background check if you have a good Gunshop with FFL to work with.

Start your budget at about $750. Sure you can buy a complete very basic AR15 for that much maybe more. But it's no fun and hella generic. If you build your own you can learn everything there is to know about your gun. You'll take more pride in it. You'll be more attentive to detail. Trust yourself on this mission.

If you're extremely smart you will have patience and buy something when it comes up on eBay. Snipe out your bids. One of those things when you wait to the very last second to bid and then bid immediately again against yourself so no one can phase your last bid! Re-read that last part if you didn't quite get it. Yea being a sniper when it comes to eBay bids is for real!

OR just invest in a rifle kit that's a 16" MOE Magpul kit. As low as $369 on Palmetto state Armory. Comes with a Complete Upper and a stripped lower that's about 40 pieces. If you've put together legos as a kid you can for sure do this right here!  PALMETTO STATE ARMORY

Build it and the bullets will come.

There's a couple youtube videos on how to build your AR15 Step by Step... Hunt for it!

I thought long and hard about my paint job. I always loved the Joker and Donatello from the ninja turtles. I fell in love with the Kryptek styles of paint. So I bought Ironlak and Montana Spray paint because most spray jobs and cerakote would take forever and cost you $300 or More to get what you want done. This way I'm customizing it myself. Use whatever spray paint. Let it dry for 30 minutes in between layers and then go ahead and spray a clear coat of matte finish... *See video youtube directory below

You can interchange all of your colors easily. To get the patterns on e-bay this is your best bet Click Here about $45 for 10 sheets which can be reused and great for about 7 to 8 paint jobs.

Go out Drill and have fun!

Honestly this adventure took me a good month. I encourage you to submerge yourself into the art and gunsmithing. Buy a kit. Build your own, envision it how you want it to be, proceed, succeed.