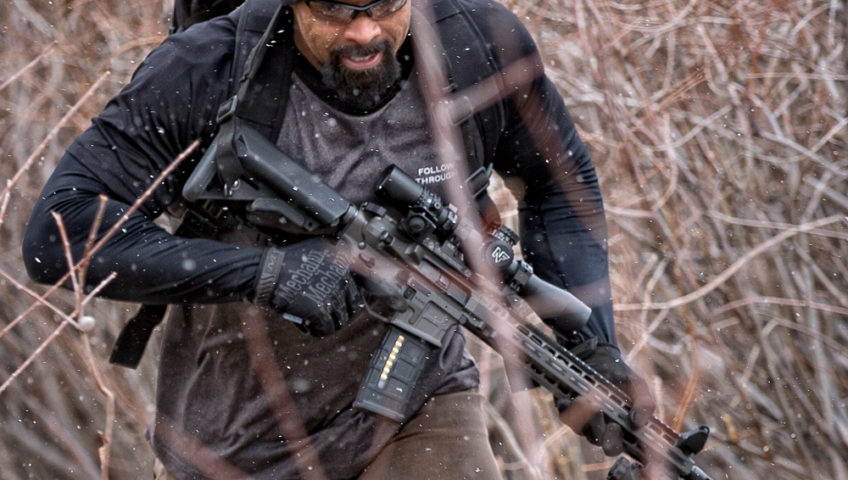 The young sergeant did his best to hide a look of surprise when he realized the battle-worn gunnery sergeant in front of him wasn’t there to drop off some fresh-faced lance corporals for Marine Corps Scout Sniper School — no, I was there to check in … as a student.

In my mid 30s, I was a generation older than all of my classmates, had a good 10 years on all of my Sniper School instructors, and already had multiple combat deployments as a Recon Marine under my belt. Still, on the first day of class I pulled the rank insignia off of my uniform and made it clear I was there to be treated as any other student. Over the next 11 weeks, as our numbers shrank from 60 to 40 to about 20, my body was taxed, pushed, and challenged in ways that I had never experienced.

Stalking slowly and silently for hours — on all fours, crouched, bent over, then frozen in the prone as we waited for our shot — our necks, backs, and shoulders screamed, ached, and spasmed. If we came thinking we were in shape, we soon learned that we’d have to develop a completely different set of muscles and redefine mental and physical stamina if we were going to succeed.

It’s Easy to be Hard, Hard to be Smart

Back then, I wasn’t educated on how to prepare for, or recover from, the various types of abuse the job required — there was no “pre-stalking warm-up” routine or Stretching for Snipers handbook. The answer to most things was: suck it up and drive on.

My gym routine at the time favored power over precision, bulk over balance. We use the term precision to describe long-range shooting, to differentiate it from other types. Whether you’re a Marine Corps sniper, a hunter taking down elk at 800 yards, or long-range competitor, we need to be more precise in how we prepare our bodies for the unique challenges of long-range shooting.

Most people, however, don’t associate the concept with the type of muscular stamina required to hold a rifle up on target, or to stay in a prone or crouched position with head erect, eyes on glass. In addition to developing cardiovascular fitness, long-range shooters need to tailor their training to develop muscular endurance, particularly in their core (abs, chest, upper and lower back), as well as their shoulders and neck.

During my three-day scoped carbine course, students are often surprised to find the most mentally and physically challenging segment of training isn’t the “run and gun” course of fire, where they are running from cover to cover, but the segment we spend lying in the prone. Why? Because most of them haven’t spent much time in that position — it feels awkward, uncomfortable, even painful to lay on their stomach, arms forward on their weapon, while holding up that big noggin — while being still enough to decipher the holds on their reticle and keep eyes on target.

One of the ways shooters can gain muscular endurance is by “dry practicing” shooting positions at home or on the range. Spending a few minutes each day getting into the prone (or other shooting position) will go a long way toward getting your body accustomed to otherwise unfamiliar positions and building the muscle memory and endurance that’ll help you to “settle into” your gun.

Strength: Another way to build muscular endurance is through strength training. It’s true, bigger biceps won’t put more power behind your bullet, so why does strength matter to a long-range shooter? Full-body strength training is beneficial to any shooter as it helps balance out uneven muscle development and protects joints from injury.

In addition to a typical strength-training regimen, however, long-range shooters need to include isometric exercises, where muscles contract in a static position, such as doing planks or yoga. Often, shooters equate being still to being tight. While tightening up muscles, like a child in a game of freeze tag, will keep you still for a short time, it’ll also cause you to expend a huge amount of energy, leaving your muscles shaky, sore, and fatigued.

One of the benefits of isometric exercises, such as yoga, is learning to be still — holding a pose or position — while relaxing the other muscles in your body. Yoga not only improves strength and core stability, but flexibility, breathing, and mental focus — all attributes likely to benefit the long-range shooter.

Stretch: As with any sport, it’s important to stretch both before and after shooting or training exercises. Prior to shooting, stretching helps to reduce tension and loosen joints, helping to maintain a relaxed position, whether standing, sitting, or in the prone. A regular stretching routine also increases the overall flexibility needed to get into various, more awkward, shooting positions.

Just like a baseball player swings a bat on one side, or a place kicker uses a particular foot to kick, shooters use muscles on one side of their body differently than the other. Constant use of muscles on one side tends to pull hips, the back, and other muscles out of alignment and become more prone to injury. After shooting, stretching helps counteract muscle imbalance and keeps injuries from taking you out of the fight.

Rather than constituting a full routine, the following exercises (in addition to “dry practice” rifle holds) are meant to supplement your regular cardio and strength training routine. While I also use other exercises, these pack the most benefit for shooters of all fitness levels. With these as a start, I highly encourage serious long-range shooters to incorporate yoga practice into their regular routine — check out the Foundation Training Fundamentals DVD